Parachute Packing and Other Odd Jobs 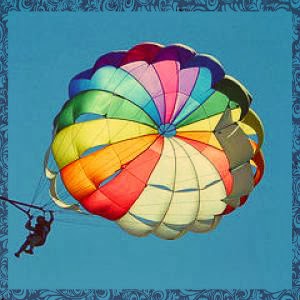 I thought of this post this past week, when I was in between a job interview - and finding out that the job went to someone else. I was thinking it would work well with the theme of what I was hoping to be my new job, but it didn't quite turn out that way.

When I was young, my Dad introduced us to the story of Captain Charlie Plumb. He was a fighter pilot on the aircraft carrier Kitty Hawk, and his plane was shot down over Vietnam where he remained a prisoner of war for several years.  He was released and eventually returned to the United States, where one evening several years later he had a conversation with a man, a sailor, also stationed on the Kitty Hawk and worked aboard as a parachute packer - incidentally he had packed Captain Plumb's parachute, which had saved the pilot's life.  Captain Charlie Plumb is now a motivational speaker with a strong message that he uses to impact people's lives.

This concept has been floating around in my head as I try to follow God's leading toward new employment.  Metaphorically, the parachute packer is someone who works behind the scenes, someone who is diligent in the tasks that they have been given in order to see others well protected, and advance in their own lives.  I equated getting this new job to be something like that, I would be a parachute packer for university students wanting to become teachers.  But, hearing that another person has been chosen for the job, gave me pause.  What am I supposed to do now? Then it occurred to me, that this blog post idea is still ideal, no matter if I had this new job, or not.

I'm not famous, nor do I desire to be. I've always been comfortable working in the background. I think it's part of the reason I became a teacher.  I like the background work and preparation, thinking about the lessons I plan in order to impact students lives.  Interestingly the place that I am in right now lends itself very well to parachute packing, working behind the scenes to build others up, to speak into their lives and offer love, help and support wherever I can. For my kids, it means being the Mom that they need for right now.  These things that I consider to be so little, and of no great importance are instead the critical things that matter the most, or will matter the most one day. The first thing you want to know after you jump out of a burning plane, is that your parachute will open, no matter what.

So, it's a question I've been asking myself lately...who's parachute are you packing?
at November 01, 2013