Over the past few years, the issue of Gay Straight Alliances and their connection to Christian schools has one that has caused ripples of concern in many communities determined to stand toe to toe with the Alberta NDP government. It has come down to theology vs. politics, and the fight has centered mostly on small, rural Christian schools, as well as with Catholic districts uncomfortable with the new legislation. As with most things, I'm late to the party but I finally know what I think about it all - or at least I will by the time I'm finished writing this.

From what I understand, this struggle stems from the way each group defines the origins of homosexuality and trans-gendered people. Something that I am no where near qualified to speak about, and so will avoid it as much as possible. The government stated that Gay Straight Alliances cannot be banned, and should be supported in schools. GSA's provide a safe space for students who may be wondering how to "come out", or who are dealing with other relevant issues of that nature. Student attendance in these groups would not be reported to parents. For Christian schools, this creates an uncomfortable situation. Christians look at issues of sexuality in many different ways, and all parents sending their children to Christian schools have varying expectations regarding how the topic of sexuality is dealt with for their child. On top of this the question of religious freedom is a very important one. I can understand the Christian perspective that feels the government is infringing too much on religious beliefs. This, and other logistics around Christian schools has ended up creating tensions politically, and socially across various groups.

As a parent, a teacher and a Christian, this issue has given me a great deal to consider. It seems that I am facing an intersection of ideologies and moving forward can be uncomfortable in any direction. As a parent, I want to teach my children to love, and show love especially to people who are different to them, or to people who are experiencing different things from them. As a teacher my heart is for the students who come, even in Christian schools from difficult situations and backgrounds, and I want them to grow and thrive in spite of circumstances. As a Christian, I think that we come from a many different positions on sexuality, from the perspective that any alternate sexual lifestyle is sinful to the point of view that God is love, and that he created each person as they are. As a person of faith, I want to find the perspective that is the most healthy, and affirming to teach my own children.

As a teenager, I grew up in the "true love waits" era in a strong purity culture. I was proud of my purity ring, and made my stance on premarital sex very clear. I didn't want it, and that was that...until I got a boyfriend, then my world shifted dramatically. Then, not only did I want it, I wondered how much I could get away with before I really "stepped over the line." I wanted to be free to explore my sexuality to it's fullest extent, but there was one thing that held me back.

I grew up in an imperfect but very loving home. My parents said I love you, I support you, you are wonderfully made. But the one thing that prevented me from participating in a sexual lifestyle before I was married, was the absolute fear that I would get pregnant. Pregnancy, similar to homosexuality or being transgender is impossible to hide. It leaves the individual open to public scrutiny. Once pregnant, abortion was out of the question, and I knew if I had to tell my parents that I was pregnant the shame would be a lifelong stain. It would color me and the baby in a way that we would never escape , and that feeling was so tactile I held myself back. The mask of purity was held in place firmly by fear, I was no more "godly" than the next person, and whenever someone older commented on how well I was doing, and how I was an example to other younger people I died a little on the inside. Because a "pure" relationship with God wasn't even what was holding me back, it was fear. I know that I was not the only one. I know of instances for others where sexual assault and even rape went unreported, because of the guilt and shame those individuals experienced, and the fear that they would be judged by their own faith communities.

I say all of that, only to point out - that I came from a loving and supportive home, and I was terrified. As Christians, we see the very best in our brothers and sisters, and we want to believe that they too would be loving and supportive of their children with an unintended pregnancy, or coming out as homosexual, or transgender. But the truth is both sad and alarming. On twitter there is a group that calls themselves "Exvangelicals" and identify as people who have left an evangelical church, and in many cases have left Christianity all together because of abuses they experienced, yes - at the hands of pastors, people in authority, but often because of abuses by parents. These stories have shocked and saddened me. But, it is important to hear them and to change the way I raise my own children.

On a recent road trip we chose an old favorite audio book, C.S. Lewis' The Last Battle. It's a story that Brad and I love, and hope that our children will begin to love as well. I find, it's always nice to hear a familiar tale once again, but this time around something stuck out at me that I hadn't paid attention to before.

Around half way through the book, Lewis introduces a character named Emeth. I have since learned that this character is somewhat controversial, but while I was listening to the story Emeth captivated me. Emeth is in fact not from Narnia. He is instead, a servant of the Tisroc, and called a Calormene - long standing enemies of Narnia. Emeth is in Narnia as a part of a secret invasion force. In search for his god, Tash, Emeth finds himself in Aslan's country, and face to face with Aslan himself. Emeth tells Aslan that his desire is to meet with Tash, and that his entire life has been done in service to this god. Interestingly, Aslan welcomes Emeth to his country, and explains that "I take to me the services which thou hast done to Tash [the false god]... if any man swear by him and keep his oath for the oath's sake, it is by me that he has truly sworn, though he know it not, and it is I who reward him." CS Lewis, (The Last Battle)
This position is of course controversial in Christian circles as it seems to imply that Lewis believes people from various backgrounds and beliefs might be saved, even without the direct knowledge of Jesus. I learned that CS Lewis defended his writing from Jesus' parable about the sheep and the goats.

I think that every prayer which is sincerely made even to a false god, or to a very imperfectly conceived true God, is accepted by the true God and that Christ saves many who do not think they know him. For He is (dimly) present in the good side of the inferior teachers they follow. In the parable of the Sheep and Goats those who are saved do not seem to know that they have served Christ.(CS Lewis, commentary from a letter 1952)

If you're still reading, you might be wondering where I'm going with this. As you might have suspected, I'm not here to argue Lewis' theology. The truth is, I haven't spent much time thinking about inclusivisim or soteriology. But, I deeply respect CS Lewis and his works. What struck me most about this part of the book was the exploration by the author of a question that was deeply important to him in spite of the fact that was, and still is controversial. By the way Lewis describes Aslan throughout the Chronicles of Narnia, the reader can make inferences about Lewis' personal relationship with God as a loving, devoted father, but as the books point out on several occasions Aslan is not a tame lion. Yet, Lewis feels comfortable in his relationship with God to ask these deep, controversial questions, and come at them with an answer from a very different answer than what is believed in the mainstream.

This leads me into some conclusions about GSAs. From the perspective of a teacher, of course you always think the best of student's parents in your classroom - but if you are honest you know that each situation is very different.  What the child experiences at home may be very different than what it is presented to be. As a teacher it is my legal obligation to report any suspected incident of abuse - ultimately for the safety of the child. In a Christian school, as anywhere, this would be an extremely difficult situation. As a teacher, it is most important for me to hold my beliefs and obligations in balance, but when the situation calls for it, when the situation calls for it, the thing that I am obligated to do would take precedent over personal beliefs say, for example, about who I might believe a parent is.

For Christians the subject of homosexuality and trans-gendered people is a difficult one, we don't have good theological answers, and the answers we do have feel conflicted at best. Yet, it is time to face the reality that there are  Christian kids grappling with these issues and don't know how to express themselves, yet are desperate to do so. From my own experience, I can say that if there had been a place that I considered safe when I was dealing with coming to terms with my own sexuality, it might have made things easier for me and for others. I believe as Christians, as people of faith, we have something positive to bring to GSAs. We have to set aside that it is uncomfortable, and grapple with those issues on our own later, and reach out to these kids like Jesus himself reached out to prostitutes and the least among his own people who were considered visible in their sin to the society. It didn't change who Jesus was, or what he was going to do, but it showed us his love in action standing against the norms of his day. Just as CS Lewis was able to sit at the feet of his Father, and ask a difficult question, so should we.

This year, that's where I intend to be. Happy New Year. 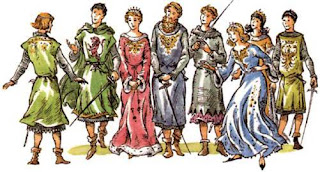 *Images are not my own. Copyright CS Lewis - The Last Battle