Smiling on the Train 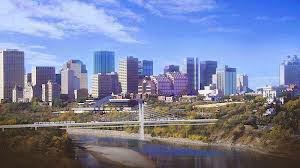 BELVEDERE STATION
I recently started a new job in that I am blessed enough to have to take Edmonton's LRT to work. To be honest I was scared to do it, but now that I am, I wish that the LRT went absolutely everywhere in Edmonton. My daily reprieve from fighting rush-hour traffic has not only been an interesting experience, it has also allowed me to start reading again - an activity I much prefer to driving.


COLISEUM STATION
Every morning and afternoon, I find myself (sometimes stuffed) into a high-speed rail car, shoulder to shoulder with old men balanced on canes, small children pasted to train windows, middle aged working girls, strange smelling college students and me.  The train is an interesting place, it's a small, confined space, where people feel obligated not to speak too loudly, and to avoid eye, and more importantly, bodily contact at all cost.

STADIUM STATION
Interestingly, being with this segment of the population day in and out, has brought out some surprising responses from me.  The first - snap judgements, both positive and negative. I JUDGE people - readily, and almost immediately. I don't know if being sort of sequestered in my own mind, in a roomful of people has brought that out, but I am shocked at the judgements I make. A woman with blonde hair, and glasses, wearing a nurses uniform must be kind, and happy with the fulfilling work that she accomplishes, saving lives each day. A young man, covered with strange tattoos, nearly asleep, slouched in the corner and taking up far too much room on a crowded train, is obviously a criminal miscreant. 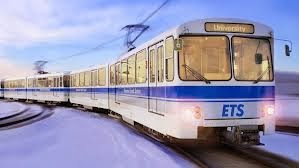 CHURCHILL STATION
I found that these judgements come quickly, and if I am not being aware of what I am thinking about, I allow myself to pass these kinds of qualifications on any person I come across.  Especially if something about that person is irritating.  For example, a few mornings ago, I found myself across the aisle from a Dad, a pregnant Mom, and a young boy around four or five.  The young boy was loud, and rude to his parents, when they asked him questions, or tried to share information from them.  The most horrible thought came to my mind. Great - You're working on raising yet another self centered drain on society who clearly has no boundaries and has never even heard the word NO, and you're going to have another one. CONGRATULATIONS.

BAY/ENTERPRISE SQUARE STATION
Not to mention, on my ride home on Friday, the Police were on board the train, checking passengers tickets. They made their way slowly through our car, checking each ticket carefully.  Passing me, they moved to a young man sitting behind me.  Well, he had no ticket, and do you want to hear his excuse? "It must have fallen out of my pocket as I raced down the stairs to the Train.  My first thought - Yeah, right buddy. Got caught free-loading eh? As if the embarrassment isn't enough, what this poor guy really needs is MORE judgement.  I mean, he was forced to get off the train at the next stop, and probably ticketed for $150.  Sure, it's easy to call him a free-loader, some jerk who thought he could get away with using the train for free.  But maybe, that isn't all there is.

CORONA STATION
Maybe there's more to the story.  As easy as it is to judge someone, it is equally as simple to wonder.  What if he didn't have the money, but needed to take the train? What if he was going to visit a sick friend, and the train was his only choice, and he spent his money on picking up a prescription for his friend? Ok, I know, as a writer I tend to exaggerate, and the most likely story is usually true, but it has started to make me wonder about EACH person I see on the train. What's your story? Are you what you appear to be? 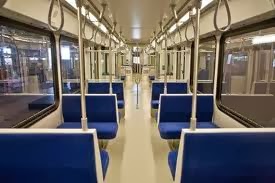 GRANDIN/GOVERNMENT CENTER STATION
It has made me stop and wonder - what are the snap judgements people make about me? Staring at myself in the reflected lights of the passing city, I've started to wonder, Are you what YOU appear to be? I have taken the time to study my tired looking, sometimes fairly homely reflection, bundled in an over-sized coat, continually popping cough drops, trying to smother those same coughs. (It's been a tough February!) I wonder what other people think. Oh seriously! Of course I get to sit next to the cougher, can't you just stay at home? Spare the rest of us your disease?

UNIVERSITY STATION
At the very least, it those thoughts have made me take pause in my judgements. To look for the good in people. I have found it is as easy to wonder, and think kind things about people, as it is to think the negative, and believe the negative about someone right away. On a particularly slow ride, due to construction, the conductor's voice came in over the speaker. He started to talk, to share events from the day - actually it was the day the women won Gold in both curling and hockey, he told jokes, he shared information about the LRT, and made the ride generally pleasant as people started to smile and laugh with each other. That got me thinking - it doesn't take much.

HEALTH SCIENCES/JUBILEE STATION
Seeing people as valuable, not judging who they are or what they are makes it less difficult to wade through the thousands of silent thoughts floating around the train car.  Now, it doesn't mean that as of yet I have been brave enough to actually hold a conversation with someone, but, I can smile at them, say hello, and thank you. In fact, I have a secret project that I am working on currently. There's a young woman who, every morning is standing at the front door of Belvedere station handing out newspapers. I smile and say Good morning every morning. I am hoping to one day get her to smile. So far...no luck...but she did say 'morning once. 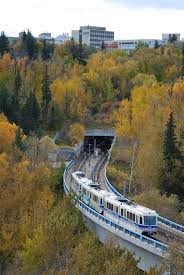 Thank you for riding the LRT with me today, and I've learned to stop seeing strangers, and to start seeing people.

What a difference a week can make.  When I wrote this post, I didn't know how truly critical it would become for me this week.  In a strange way, it was like I was speaking to my future self. Last night, as I settled in for the ride home, I met a young woman with red hair, and the most interesting tattooed eyebrows I have ever seen. I wanted to tell her that I thought so, but shied away at the last minute for fear of being "weird" or too "intimate" with a stranger. That young woman never made it off at the next stop.  She collapsed in the doorway of the train, and stopped breathing. All I could do was watch, and pray, and pray, and pray. Though she was given CPR almost immediately, and though there was even a Doctor on board the train, she never responded.  It was like watching something surreal, and the five or six of us from that car of the train, who gathered around her were all pulling for her, all hoping she would start breathing on her own. Every time the attendants were asked, is she breathing? And the response was negative, it was like we all would let out a collective sigh of sadness and disappointment.

I don't know what happened to her, she wasn't yet breathing when the train finally pulled out of the station. I pray that somehow, because she was only 22, that she pulled through. But, what I saw, should be a credit not only to the LRT, but also to the Edmontonians on board.  We gathered around her, working together, a congress of strangers who wanted nothing more than to help this woman, who was all alone and in the most desperate moments of her life.  I can tell you, it wasn't hard to see people then, to see the worry, the concern, the effort at finding an answer that would help this woman - and in all of the upset, and sadness, and fear, there were people willing to do whatever was needed to help.

We live in a good city, a great city, a wonderful community - willing to look evil in the eye, and do what is right.
at February 25, 2014 1 comment:

Call me here
My pretty one
Let us dance
Beneath the sun
And on the moon
In dust we run.

Believe the truth
That you are fair
So heart to heart
As one, a snare
I shall have you
My heart does dare
Call me here, my pretty one.