When I was young, one of my favourite times of year was December.  Not only did it mean a break from school, Christmas Eve Appetizer Night, and beautiful Christmas Day surpises and celebrations, it was also the month where my family and I sat back and took in all of the old Christmas Classics.  We watched them all...Dickens' A Christmas Carol, the really old, black and white grainy one.  The one where you can see the camera guy in the reflection of the mirror in Scrooge's bedroom the morning after the ghosts visit him.  We watched All I Want for Christmas and Miracle on 34th St, but my all time favorite is the iconic story of a man named George Bailey, in It's a Wonderful Life  starring Jimmy Stewart and Donna Reid.

There is nothing about the movie that's hard to like, but one of my favourite scenes involves George, and a young woman named Violet Bick.  She's the fancy girl, beautiful like Marilyn Monroe, turning every head in the town except the one she'd really like - George Bailey. At this point in the movie, George Bailey is finally asking her out.

GEORGE: Are you game, Vi? Let's make a night of it. Let's go out in the fields and take off our shoes and walk through the grass.  Then we can go up to the falls. It's beautiful up there in the moonlight, and there's a green pool up there, and we can swim in it.  Then we can climb Mount Bedford, and smell the pines, and watch the sunrise against the peaks...we'll stay up there the whole night, and everybody'll be talking and there will be a terrific scandal... 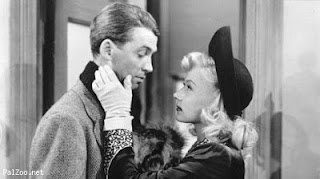 Fortunately for George, Violet turns him down.  But, I always wondered why she did.  I think I would have gone with him, scandal and all - and I'm not even what you would call "out-doorsy".  George Bailey wanted adventure, excitement, and it made me want it too.  I think that he and I would have been friends.

I don't know, maybe it's his continuous self-sacrifice for family and friends, or the lilt in his voice when he speaks. Or possibly telling Mary, as she sits naked in the bushes, that if she called the Police to make him give her back her robe, they'd be on his side anyway, that sticks itself deep in my memories.

Or maybe it's fond remembrances of being settled downstairs in front of our roaring wood stove, snuggled up beneath blankets and sharing an over-sized bowl of popcorn while the snow piled ever deeper outside.  Sitting all together we would boo Potter, and shout for Uncle Billy to check his newspaper, cheer Clarence and root for George. It never got old, even after we could all recite the movie practically by heart. It's the kind of memories I want to work to build with my own children, enjoying each other and remembering that each of us is so special, so important, and that we may never really understand the impact that we have on those around us.

Well George, I'm game.  I imagine I'll be seeing you again this month, some time in the next few weeks, and I look forward to it.

Email ThisBlogThis!Share to TwitterShare to FacebookShare to Pinterest
Labels: The Empress of Khal Manar

I had one of those, I'm-mad-at-the-stupid-world days yesterday. Nothing seemed to go right, from start to finish, and to top it off I had to tutor some of my students.  Actually it was the last night I would be tutoring them. So, I raced home, threw dinner somewhere in the direction of the kitchen, ran around trying to get the computer to link to the printer to print some worksheets for the night.  Dodge my daughter, who was doing what I wanted to do - cry while she wrapped herself around my legs, and at the same time reply to texts, phone calls and not stress out that my husband wasn't home on time. The fact that when I told my four year old that this was my last night of tutoring, and I wouldn't be going any more, he said "That's ok, Mommy you can keep going. I like staying at home with Daddy when you're not there" didn't help. I was snippy, rude, a poor form of cranky, all day, and by the time I arrived to tutor the kids, screaming-crazy-upset-almost-to-the-point-of-road-ragin'-tears all due to what Edmontonians like to call "a bit of traffic."

I calmed down, gulping large breaths of air as I headed for the first house on the block - debating whether or not I should toss myself in a snowbank to cool down. Deciding it was better to arrive flushed than pasted with snow, I settled into tutoring, and saying goodbye and all of those kinds of things - but something happened at the house of my last student.

A few weeks ago, when I decided that it would be best to cut back my hours, I wanted to give each of the students a small parting gift.  The boys I tutor were easy - a card game that we often played together and they enjoyed seemed to fit. But, the girl was a little harder.  She's a sweet, quiet sort, the kind that you get to know by watching, rather than talking to - the kind that takes a while to get to know.  I had been tutoring her for around six months, and still only knew that she might like a book.  So, as I scoured the shelves of Coles, I breathed a small prayer for help. Not the kind you expect an answer too, just the kind that helps calm you down to focus. It took a bit of time, and I mused over several titles in the young adult fiction section - but eventually rejected all of those because I just couldn't give her a book with a subject that fundamentally I didn't agree with.  Finally, I settled on one that seemed to jump off the shelf at me.  "The Princess Bride," I remember grabbing the book, showing my husband and saying, "I didn't know this was a book," and thinking that it MIGHT work for my student.

Well...at the very end of our evening, I reached into my bag, giving some lame line about how nice it was to tutor her - the kind that always come out cheesy when you want to say something sincere to someone, and handed her the book.  Her usually placid eyes sparked like fireworks, and her face lit into a smile. "I have been wanting this book for sooooo long!" She exclaimed over it, and shrieked over it, and generally made the biggest fuss I have seen anyone, not to mention this quiet, unassuming girl, over a book.  I had been aiming for a simple "Thanks," and with that, I would have gone home satisfied, but she bubbled about it over and over and over, clutched it to her chest with excitement like she'd never let it go.  When her Mom came into the room, she thrust it at her. Her Mom looked at me and said, "How did you know?"

I didn't know. I couldn't have known - and it struck me, as I stepped onto the snowy walk, back to my cold van, that coincidence couldn't explain it. God put that book into my hands, for that girl. That's how much he loves me.  Enough to make me feel good about being a blessing to someone else, particularly on a day where I wasn't really being stellar at "showing" Christ to the people around me. It occurred to me that God who cares about the little things, has all of the big things in his hands.  There's so much garbage out there that wants to draw me in to worry and fear and upset, but God has a better way.  He cares about the smallest details, and he's working even when we don't know it - he's taken care of the things we haven't even thought about yet.

Email ThisBlogThis!Share to TwitterShare to FacebookShare to Pinterest
Labels: The Empress of Khal Manar