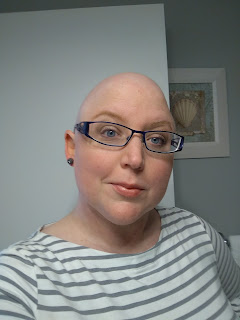 Do you want to know what my first thought was after it finally settled in that I had cancer? I said, (I hope not out loud, but I can't be sure) So, I'm going to be one of those women - those bald women, and the thought of it sank my stomach like a stone. Now, I'm not known in any way for my hair, but that mess of weird, fine, directionally challenged, daily exercise in frustration on my head was mine - and in my opinion it hid a multitude of flaws. It was almost like I feared losing my hair more than the cancer itself.

At first, knowing it would start coming out - I cut it and cried, then in anger I hacked off a bunch more, and when the inevitable fist fulls began pulling out I gritted my teeth, threw up my fist at the question "What is beauty?" and I shaved it off. That was several months ago now, and though it took a while, avoiding mirrors initially, then finally allowing myself to be surprised by my own reflection for days at a time - something strange has happened. I've come to the place where I don't mind my bald head (even if I still sometimes roll my eyes at it), and I can actually appreciate how my head helps cool me off, it's not a weird shape, I can laugh at myself when I have the automatic thought gee, it's been a while since you had a haircut and even in the right light it's kind of pretty.

So, what is beauty? Haha - I don't know. But I know that us bald headed girls are strong, that we don't let a roomful of perfect hair pull us over with envy, that we can be generous in the face of the awkward overwhelming compassion that comes in the eyes of our sisters with hair, and that we can define a place in society, in love and in beauty that means something more, something just a bit deeper. 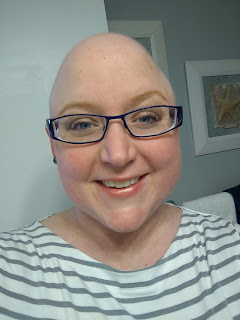